Welcome to the official blog and media hub for The HANGAR | Gallery & Arts Initiative. Located in the Wynwood Arts District, The Hangar is dedicated to the collective movement of creative exhibition and seeks to open the lines of communication between artist, patron and community. www.hangargallery.com

Italy has Casanova, The HANGAR has Barfly 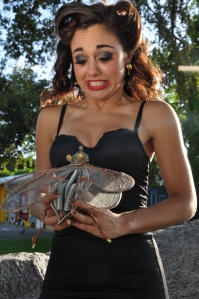 Women love him.
Men fear him.

Meet Barfly, steampunked by Ken Bessemer and namesaked after the soon to open bar Barfly, by the owner of Vagabond. You will probably find Barfly at your local pub drinking a pint of a double IPA. Originally crafted as a scale model that Ken Bessemer was contracted to build for the bar, Barfly soon developed into a local celebrity. With the fame came the women and the scandals. His rumored romance with Lauren Wolfe caused quite the headlines but was short lived.

Ken Bessemer applies his education in Fine Arts and Metals, along with his Masters in Architecture  to construct anatomical, realistic and mechanical bugs. After the creation of Barfly he decided in engineer a whole collection of bugs and a lobster.

The steampunking begins with Ken Bessmer walking down the aisle of a hardware store, looking for an endoskeleton in which he will blueprint the idea for his next creation. Ken Bessemer heats the metal and then cools it slowly after he has molded it to his desire. This assures that the metal stiffens and the structure remains sturdy. In addition he prefers to use new materials so that the bugs age and tint through their adventures.

Meet Mach Lobster, born from a pair of pliers in Iowa. Due to Lobster Machs habit of treasure hunting in water hazard areas Ken decided to use a used screen door spring. Le Roche prefers to surf in clean waters when he isn’t working at a waiter in South Beach. 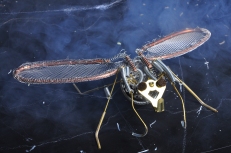 When the paparazzi caught wind that Barfly had fathered Buzzkill there were scandals as to whom the mother was. Fortunately, now that the press has backed away Buzzkill has begun traveling with his father, Barfly.

Let’s not forget Spider Mak (above), a chemist who is close to discovering the cure for bad driving. Until then, Barfly’s Mafia friend Sir ‘Tainer (below) will take care of bad drivers. 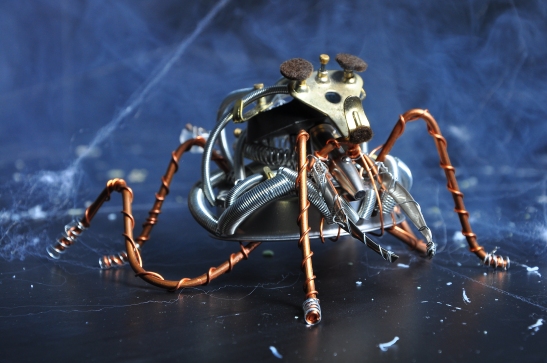 Using PvC and resin, Ben Kessemer has crafted Eve, a spider which glows in the dark for up to 12 hours. Make sure to catch Eve shuffling away at Club Eve with her younglings for Art Basel.

Ken Bessemer is looking to expand his collection to include a new set of characters. So look out for the Disco Bugs and Company during Art Basel, December 6-9, at The HANGAR.

6 comments on “Italy has Casanova, The HANGAR has Barfly”

This entry was posted on November 1, 2012 by hangargallery in Artist Interviews and tagged Art, bar, bugs, interview, miami, welding.