Welcome to the official blog and media hub for The HANGAR | Gallery & Arts Initiative. Located in the Wynwood Arts District, The Hangar is dedicated to the collective movement of creative exhibition and seeks to open the lines of communication between artist, patron and community. www.hangargallery.com 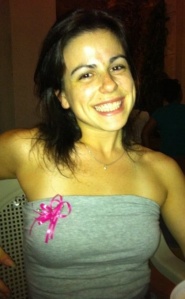 She was born Amanda Lipman. Yet, the name didn’t do her awesomeness justice, so her older sister took it upon herself to rename her Deeda.

Deeda (pronoun): coming from the infant form of Adida, from the mispronunciation of Amanda.

Currently Deeda Lipman is an up and coming photographer from New York. Her job brought her to Miami; her art to the HANGAR. Armed with a snazzy DSLR camera and a preference for IPA beers, Deeda might just be the most interesting woman in the world. Her current collection at the HANGAR depicts the aesthetic beauty in the tattoed Miami Marine Stadium in Key Biscayne. Sssh don’t tell the 5-0. 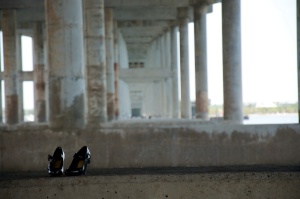 Before shuttering into her current collection it isessential that you learn how Deeda Lipman discovered her innate craft and how it has evolved over the years. One day Deeda bought herself a digital Sony camera, never knowing that she would not be able to put it down. Clicking here, shooting there, snapping anywhere. But her thirst for photography was far from quenched. Quaffing down photography books: a pint of photo exposure and drafts of lighting, she found her niche. “I first started taking pictures in auto [setting] and the more I read the more I messed around with the different settings”.

Exploiting natural light is vital for her work: mornings are ideal. Taking a look at Deeda’s photography, which mainly focuses on objects and scenery, you viscerally feel the energy and life within the picture. Her current collection concocts graffiti art with the deterioration of urban spaces. In addition, her depth of field, riding shot gun with a low ISO, truly captures the essence of the Marine Stadium.

Deeda had been dying to photograph the stadium. One day, luck on her side (and the SUN), the gate was open. Three hours of jumping and climbing on the roof allowed her to brew intricate shots from unique viewpoints. “I see things people see past, I see it from a different angle.” Fifty bucks that every time you look at one of her photographs you will find a new anecdote to the story.

A few months ago the HANGAR seduced her with our legendary ping pong table. “They weren’t a pinkys-up sort of gallery, they were relax and chill.” In addition, props to Allyson, Deeda has learned the hops and malts of art slowly becoming a master, a trait present not only in her photography, but also in her print quality and framing. Nonetheless her Pint glass is only half full with her future looking quite hoppy.

This entry was posted on October 14, 2012 by hangargallery in Artist Interviews and tagged Art, beer, graffiti, lighthouse, miami, photography.